Well, I am back to work for the final term. This is going to fly by awfully fast, in fact, it already is flying by. In addition to school I am busy clearing out and packing up to move most of our household up to the house we are renting on the coast. We will spend the month of August just up the road in Talent, Oregon. We have rented a small apartment which will save us a little money in the long run. I will have a bit longer commute to school but it will be worth it.
This term I will be focusing on figure and portrait drawing. That is, I will be starting to learn the basics of portrait drawing. The time is just too short! I say I and not we because most of the time, I am the only one in my class. There is another student but he isn't always there. Being in such a small class has its good points and it also has a few drawbacks. The good points far outweigh the drawbacks though.
So, my mornings are devoted to cast drawing, or in my case, drawing with paint. I started another grisaille. Painting is coming a little bit easier but I still need to practice with the medium. Here is a picture after the first two sessions: 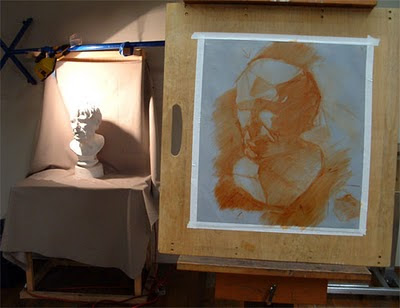 I took the picture with the cast in the background so you can get a general idea of the set up. I am still working on the shapes and angles of the light and dark areas. I will be working on this one for a bit, although have made the image a bit too big on the canvas which will cause me a few difficulties.
For the first time this year, Fridays no longer have gesture drawing in the morning. I must admit I am going to miss it as I really liked gesture drawing.  We spend the day cast drawing instead. It is good practice which is something I definitely need. It does make for a rather tiring day at the end of the week.
This is all I have so far. This weekend we had a moving sale. It was quite successful in that I got rid of a lot of stuff. It was ghastly hot, at least for me it was. We have been having 100 degree temps or close to. I know we are not alone as it seems like much of North America is broiling.
It has been a long and tiring weekend. I can't believe it is almost the middle of the month.
I should have more progress to post next week.
-Renee
Posted by R. Delight at 9:06 PM