We have been working on longer projects which is why I don't always have a lot of new things to post. However, I did bring my camera to school Friday so that I could get a few pictures of the work in progress. These will be finished at the end of school, which is coming up so very fast.
The school is looking a bit bare these days as they are busy packing up for the move. My sole remaining first year classmate told me he was done so I am now the last one standing, in my class that is. There is only a handful or so of us students left. I am busy cramming as much knowledge and guided practice in as I can. I must admit, part of me is very restless to get going but, because the school and teacher is excellent, I stay.
Here is the cast I am painting. It is a grisaille of an anatomical cast. Not a pretty cast but educational. 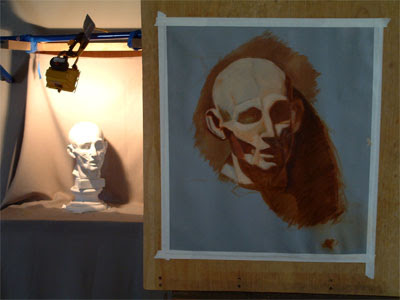 Still have a ways to go and time is running out.
Next are a couple of pictures of a cast drawing that I started at the beginning of the term. We have one more Friday to work on it. This is the first one I have taken to this stage of completion. The teacher did a few slight demos for me on it. Mainly he showed how to define certain lines on the drawing to make it look more three dimensional. The marks are so tiny yet they make a nice difference. 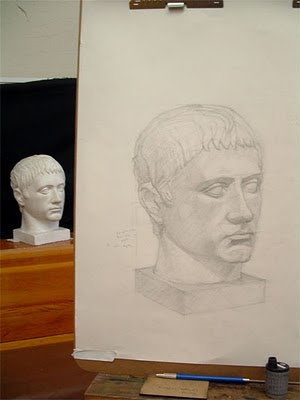 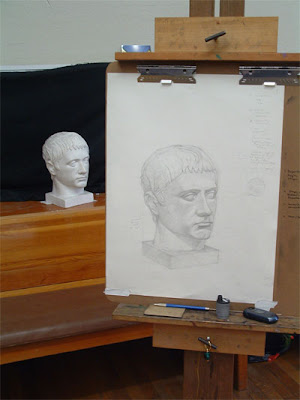 There are still hair details to add and a bit more tweaking of the tone and shade.
Thinking about where we started at the beginning of the year, I must admit, I had no idea that I would get this far. However, there is still so much more to learn.
Two more weeks! Tomorrow we are all getting together for a final social gathering. We actually have one full week next week and a final full class on the following Tuesday. Thursday, the final day will be a critique and lecture. As most of my things are up north, I won't have much to critique.
We are working on a model drawing too. I will have that finished the final week.
Next post will be a bit bare but I will have the final version of the cast drawing to show.
Until then,
-Renee
Posted by R. Delight at 8:39 PM

The work is all looking so, well professional! Beautiful work and my how you've grown in your skills! Enjoy your last weeks. The new town certainly looks enticing. Who wouldn't want that beautiful ocean in their back yard.

Thanks Theresa! I can't believe our time in Ashland is already up. When we leave we will have been here a year, almost to the very day. Life is interesting. You never know where the journey will take you.