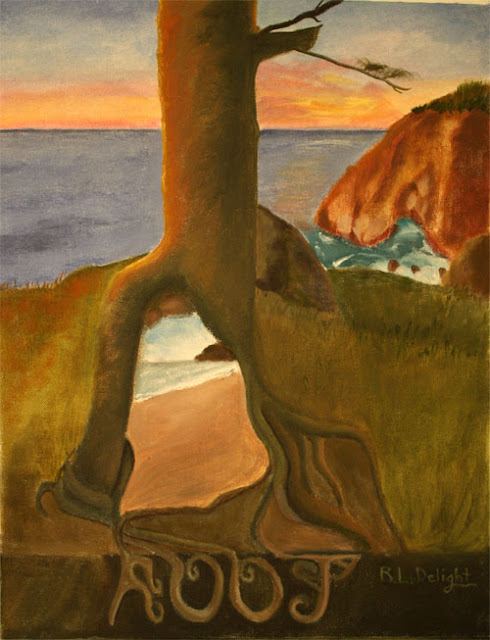 Happy New Year everyone! As I have said before, I believe 2011 will be an outstanding year. I just have a feeling... Of course, that doesn't mean I won't have to work really, really hard to make that happen. The past three or four years have been ones of great change for me personally. I believe the only major life stress I didn't experience was, by some miracle, divorce! So when asked what my "word" for 2011 was by several people, I searched my mind and heart and easily came up with 'Root." I knew we would like it here in our little beach town as the ocean is in my blood going back several generations. I have to say though, we love it here. I in particular have fallen quite hard for this area. It is the first place I have lived in all my adult life that feels like home. It isn't an easy place to live in but the beauty of the area and the wonderful, colorful people that make up this village community are incomparable.  Here is where I want to put down roots. So, on that level root is a good word. It is also a word that branches out, so to speak!
When I gave my word for 2011 to Dr. Robyn McKay, she upped the ante by daring us to express that visually. I had already been toying with that idea so I took the dare and painted my word. That is the picture above. It was a larger painting than I should probably do at this point as it is roughly 14"X18". I recycled an older canvas that someone didn't want to keep. It took a bit longer than I had intended because I have been finishing up the Sketchbook Project which is nearly done.
I am also working on a vision board this year. I usually like to do it sometime between the Solstice and the New Year. This year, due to a couple of projects, and a new challenge, I am a little late but it will be done soon. I decided to spare you the wordy visions and will just post a visual, with a few words, when it is finished.
Finally, I have a surprise, which was very much a surprise to me too! One of the many authors I read and highly recommend is Daniel Pink. He has written Drive and A Whole New Mind. One of the exercises in Drive was to create a sentence that sums up what you have brought, or want to bring, to this world. He put a challenge out to make a video of that exercise and send it to him. Weeeelll, I thought it a good exercise and made my video but almost didn't send it. It is a little out of my comfort zone to do that. But, because it is a little out of my comfort zone to to that, I did it. He had hundreds of submissions and could only pick a few to put into this video. I had forgotten about it. Imagine my surprise the other day when the video was sent out and I found myself staring at me in the video! There was a problem with my name though. It isn't correct but that is actually ok with me. A sort of pen name, or perhaps I should say, screen name. Here it is! My first attempt at adding a video to my blog.
Next week I will be in the next challenge and will have the Sketchbook Project pictures and hopefully video to go with that too!
So, dear people, what is your sentence?
-Renee
Posted by R.L. Delight at 4:32 PM

I have to add a little post script. I googled the name they gave me in the video (Renee de la Prade) and had a good laugh. An accordion-playing, punk rocker, hot babe in San Francisco! My alter ego perhaps? Love it!

How fun! The root painting is wonderful and so glad you are happy where you have found yourself. I bet it's beautiful up there.
Hm, my sentence. There wasn't an animal she didn't love.

Theresa, that is a perfect sentence and it certainly comes through loud and clear on your blog. I am right there with you in that department and animal rescue and shelter groups are the ones I am looking at to mainly give my donated proceeds to. A smaller portion will be going to the conservation and protection of our oceans. I am planning to make donating a portion of the sale of any painting a permanent part of my work no matter what subject I paint.
Thanks for sharing your sentence and Twill sends a big sloppy kiss for that too.

So very happy to see you in that video and to view your Roots painting. BTW, why would you think the size is too big for you right now? Paint in the size that means something to you...no such thing as "too big" or "too small". Choose the size that fits the project! Keep painting every day if you can. I am a sometimes fibre artist so I know the love of textiles, weaving, sewing, embroidery, quilting...all that good stuff! But there is nothing like oil painting for me so that is my current focus after many years of trying various other mediums. I guess my sentence is " Lived and painted with authenticity."

Thanks Karen, I guess I never thought about canvas size that way and what you wrote certainly resonates. I know how you feel about oil painting vs. the wonderful fiber arts. As you can probably tell I feel the same way. I always love to hear other people's sentences. Yours seems to fit well too. Sometimes I think we need a paragraph rather than a sentence as I would include both yours and Theresa's in my life too.

You are inspirational. A few years ago I started art school, other things intervened and I didn't finish. I love painting and must get back to practising esp. as my hands can't take the weaving much anymore. I must think about a sentence - haven't found one yet.

Thanks Evelyn! I am inspired by all of you in my turn. I only got one year of art school. It was supposed to be four, that was the plan but then they decided to move the school to Maui! Sometimes the best laid plans...
There are a lot of sentences to choose from, that is for sure. Sentences can change too. It is another way of taking in your life. It was fun!