I missed posting last week. Last Saturday the weather was nice so we decided it was time to go through the remaining bins that were stored in the garage. Some of those bins have not been opened in over two years as we have been moving around. It took us two days to go through everything. When we first put our house up for sale I had a weaving studio. The plan at that time was to go to the University of Oregon to get a MFA in fiber art. To make a long story short several things happened that caused a huge re-evaluation of life and I ended up changing directions and going to the Ashland Academy of Art (now Atelier Maui). Amazingly enough, once the decision to pursue painting instead of fiber was made, and we made that commitment, the house sold and we moved to Ashland. The plan was to be in Ashland for at least four years. Isn't there a quote about God laughing when you tell him your plans? Well, most of you know, the school decided to move to Maui and we decided not to follow. So, those bins, they have been moving around unopened until last weekend. Oh my. Needless to say, some of the stuff we packed in those bins no longer fits in our life. We ended up letting go of about half of the stuff. Some of it we will sell but most of it went to the thrift store and to other homes. It feels great! The stuff we kept needed to be put away in the house to be used which has taken more time than I invisioned.
Unfortunately, all of this has cut into my time in the studio, much to my frustration. Well, that is part of the reason. The other part is more letting go. I have had time to struggle a bit with being on my own before I had planned to. I will admit it is at times a bit hard to see all growth and the beautiful, wonderful work my former fellow students are doing in Maui and not occasionally wish I had made a different decision. I have had to let that go too. Don't get me wrong! I in no way regret the decision to move here instead of Maui and feel it is the right one. Letting go of all that will allow me to move forward, afterall, there are many wonderful artists who have learned on their own.
So, that is what I have been up to in addition to attending local emergency preparedness fairs, general living, and riding my bike on the beach when possible. I do have two pictures of last week's life drawing session which was such a treat. We had a beautiful young pregnant woman pose for us. This is the first chance I have had to draw a pregnant woman in the nude and I found it fascinating. It was interesting to see how the growing baby changes the balance and stance of the body and how the body shifts and changes. It was also a joy to see the beauty of the mother to be. The following two photos are of drawing and painting I did while experimenting with the different mediums. Sorry for the creases on the charcoal and conte crayon drawing! The drawing is about 20 minutes and the painting is 30 minutes. 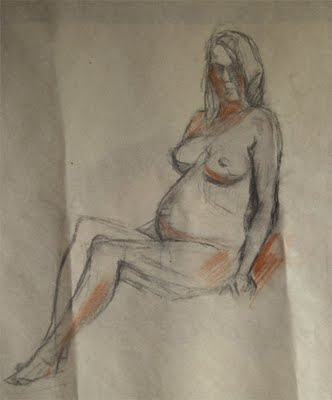 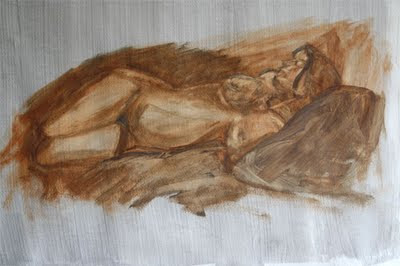 The studio is cleaned up and ready to continue working in. The weather is supposed to be nice a few days this week so I am hoping to get in a bit of plein air painting. A heads up for any fiber enthusiasts, I will have some handwoven fabric, purses, yarns and fibers to give away and sell coming up soon. I will announce it here and put it on my sleeping weaving blog. So, onward! I am excited and ready to get back to work.
-Renee
Posted by R.L. Delight at 7:09 PM

You are letting go - it is very difficult especially when learning a new skill and giving up one that is probably comfortable. I keep going back to the weaving because it is easy which means i spend less time learning the new skills. I applaud you!

Thanks Evelyn! I have to confess, it is just as well I am not able to set up my big loom at this time. The temptation to run back to weaving is strong for the very reasons you mentioned, so I completely understand. I will still have weaving in my life as I still love fiber. I would love to weave my own linen canvas at least once just to say I did and satisfy my curiosity.
I also always hesitate to post this stuff but then I remember that I made this blog to chronicle my journey. I hope to dispel the myth that art just lands on the lucky few. The fact is that it takes hard work like anything else of worth. The road is not an easy one either.
Thanks for your comment. It makes me feel that I am not alone!