Shelter From the Storm-Take One

I went out to paint yesterday with a possible storm shelter to try. It was a good day for it as it was windy with frequent squalls. The waves were fantastic of course! My mate had purchase a lightweight backpacking tent a few years ago. It is basically a fancy tarp. I carefully read the instructions and pulled it out to look at before heading out to give it a try on the beach. I actually managed to set it up fairly quickly and crawl inside. Alas! as I sat there trying to look out I realized I would only be able to have a clear view if I was laying down. I quickly packed it back up and set up my painting gear.
Now, I know this might shock some of you considering how careful I am with everything from dressing properly to knowing the tides, and never turning my back to the ocean, but apparently I wasn't quite awake when I set out to paint. I was so confident that the tent would work that I didn't wear my rain gear...or even pack it. Of course, as soon as I set my painting gear up and literally had the brush in hand, a sudden squall came out of nowhere and I was soaked to the skin in about two seconds flat. Just as quickly the squall passed leaving me standing there dripping wet (I did have a hat and coat on but not a raincoat). Did I mention it was windy? Even though the sun came out a little bit, I knew I had to leave. Wet clothes plus cold wind is a recipe for hypothermia. I packed it in and spent the evening researching lightweight storm shelters. I am waiting for another one to try out with hopefully better results.
Today I set out again. I just love painting this time of year with the stormy seas! Here is a quick one hour or so sketch I painted, wearing proper rain gear. I tried a new-to-me approach which means about 5 steps backwards (more on that later) but here it is, Wave Study #61:
It is still in the flat shape stage, no highlights and just the suggestion of wave shaping. The tide was just reaching its high point when I had to pack it in due to a rather nasty squall coming in fast. The cross waves were just beginning to form at this stage and they were quite large. There is just a suggestion of the cross waves in the painting. I am not going to do anything more to this study because I like the energy. There is actually a lot of information I can use in this one if I wanted to create a studio painting from it.
This is the first time I have painted sitting down. I didn't have much of a choice as the gusts were pretty powerful. I used rocks to help anchor my painting tripod and stayed low by sitting on a rock. The wind suddenly got stronger and I looked up to see this coming at me: 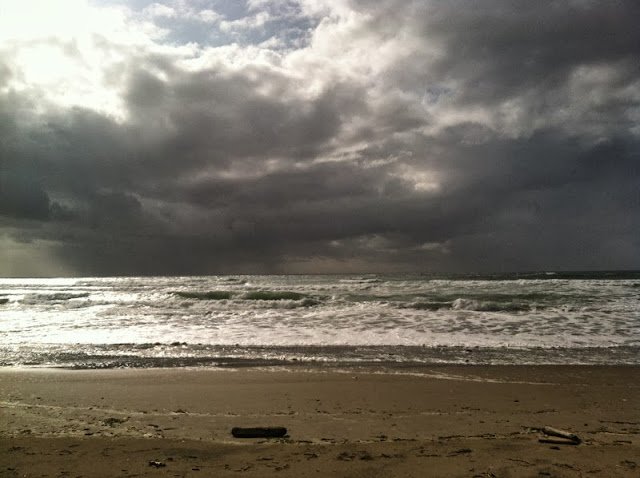 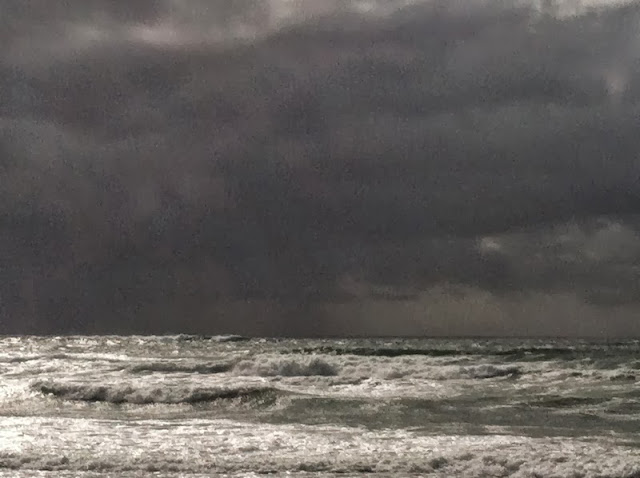 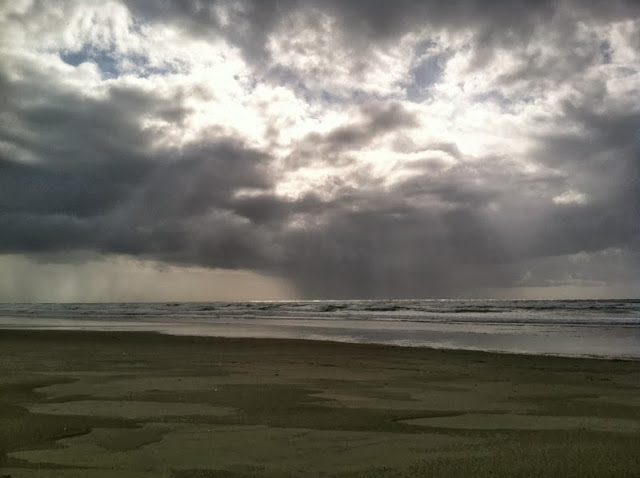 Fortunately I can pack my painting gear up in about 3 minutes. Huge drops were splattering around me as I scrambled. Well, tried to scramble. I had been so absorbed in painting and was sitting on a rock, when I got up my legs didn't want to work and I almost toppled over. It was more like lurching around packing up. It took the three photo shots above as I was hiking down the beach in the rain. I just got the back end of the squall as the winds were from the Northwest. The storm went south before hitting the shore.
It is probably just as well I packed up as I was pretty cold. I has spent a little time before starting to paint just observing, something I try to do whenever I go out.  I need to wear more layers. I haven't used my new foul-weather gear I purchased this summer yet. It is for pretty serious weather. When I got home I made a cup of hemp milk hot-chocolate in celebration of the Fall storms.
One final note, as I was heading home I passed another plein air painter standing in front of her hotel room sliding glass door painting away. She had a nice set up and was sheltered from the worst of the weather. At first I thought, Hey, another painter! And then, the rather silly thought that she was somehow cheating went through my head and out again. I quickly realized that although she had a lovely view of sea and dramatic sky, she could not really see the waves very well from where she was. I want to paint waves. I also realized I really love being out in the thick of it all even if it is very challenging at times. She looked like she was having a good time and I hope she gets some great paintings during her stay here.
Stay tuned for more on my efforts on finding shelter from the storms while painting on the beach with the ocean roaring, wind screaming, and waves surging around my feet... OK, maybe I am getting a bit dramatic here. Chocolate does that to me!

Well, well, well, back and getting better than ever. BTW, one of the recent previous wave paintings I thought awesome! You should be in heaven abut now. Looks like an early start to a true fall and plenty of storm action marching through on a regular basis. Glad you are painting but mostly glad you are feeling better every day!