The Trouble with Tilly

I had a wonderful day of rest and reflection on Thursday and was back in the studio on Friday cleaning up and turning things around for my next few compositions. I am starting work on a painting I am calling The Silent Ones. I will be filling in the details as it develops over the next couple of weeks. It is a composition I have had in my sketchbook for a few years now. Part of the composition involves a figure bending down and reaching toward a reflection in the water. When I was at one of the life drawing sessions, I asked the model to take the pose I had in mind so I could sketch the mechanics of what is going on in the body when in the particular pose. The model was a trooper and managed to hold the pose for nearly five minutes while I sketched like mad!
I had my husband take a few pictures of me on site, and clothed, in the same pose for photo reference. I know that I will have to do most of this painting using the photo reference as my guide. I am a little nervous about that as most of my experience is in drawing from life and I am not sure how to translate some of the challenges that painting from a photo reference presents. Fortunately, Terry Strickland recently posted a wonderful pro's and con's list on working from photos here. I found it very helpful and the timing was perfect for me! I have read about the problems with working from photos in various articles but thought her post put it succinctly and addressed some of the solutions.
I had one more trick to try to make the pose as much from life as possible...Tilly. Tilly is what was often referred to in the past as a lay figure, or what we would now call a drawing manikin. Tilly is sort of life size. I say sort of because she is not entirely an exact replica of a woman. She is about a foot taller than my 5'2" self and weighs in about 35 pounds. She has articulated joints that can be posed in many positions. James Gurney did an interesting series of posts on the historical use of lay figures starting here.
Alas, Tilly is not going to work out. I spent most of the day wrestling with her. She was most uncooperative and she even lost her head at one point. I was tempted to take a picture of her sprawled on the floor, headless, but restrained myself. Here is a picture of her striking the pose, or part of the pose I was trying to get her to model: 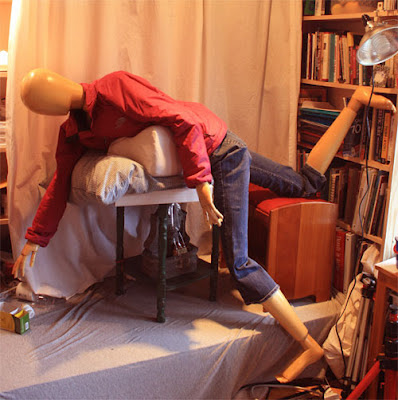 She is wearing my pants and jacket. Her hips are a bit wider than mine and her rear end is well, flat. Would it seem a trifle silly to admit that made me smile? I almost got her in the position I needed, the torso that is. I just couldn't get quite the right twist and light angle in the small space I have. The head and neck area has a lot of limitations. We are far more flexible in that area than a manikin can ever be and I couldn't get the angle I needed. The feet and legs I gave up on entirely and are not even close.
When I knew we would be moving out here to a relatively isolated location, I used some of the money I had planned to spend on tuition and got a few things I thought I might need in the studio. Tilly was one of them. She has yet to earn her keep so I am doubting the wisdom of such a purchase but perhaps in the future.
Well, to wrap up a bit of a lengthy post, I decided Tilly wasn't going to work out for this painting. I got her standing quietly in her corner and, exhausted and sweaty from lugging her around, decided to call it a day, but one final photo:
By the way, Tilly is named after a lighthouse that stands out to sea on the northern Oregon coast. The lighthouse is officially called the Tillamook Rock Lighthouse but the nickname is Terrible Tilly due to the rather extreme and horrific conditions there. To give you an idea:

If you are curious, the very informative site from where I got this image is here at Lighthouse Friends and has the story and history behind the lighthouse.
A bit of interesting history from our neck of the woods.
Back to work in the studio tomorrow!
-Renee
Posted by R. Delight at 2:38 PM

I really liked this post - NOT overlong and got quite a chuckle out of your struggle with Tilly . But then I wondered how I would like to fight with a 6ft 2 wooden doll in my own studio ! I hope she is more helpful in the future .
I was fascinated by the James Gurney ref and his history of lay figures - I wonder if there were special craftsmen or if it was part of the dollmakers' remit ?
And thank you for the ref about using photos - very useful for cats . I learn a lot from yr blog .

Thanks Rukshana! I was wondering about the crafting of the lay figures myself and toying with the idea of making a half size one like I saw in one of those pictures. I learn so much from the blogs I read (at the moment am dreadfully behind in the reading of) and it is always a pleasure to pass on what information I can.