Growing Pains and Words of Wisdom 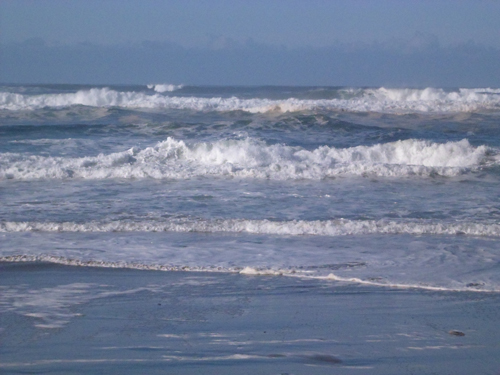 As you can see from the picture above it was a beautiful day. I was excited to get out and paint. The sun felt warm on my face and there was no wind to speak of. I was entranced by the cross waves, giant billowing waves that were nearly as large as the incoming waves. Alas, I have no painting to show. I had started painting and suddenly, it just wasn't going the way I wanted it to.
The problem, in my eyes, was that it was looking like all of my previous paintings. Now, there is nothing wrong with that, I am proud of my work, but I am trying to get to a certain quality and level of painting. There were a few other problems too but I have pinpointed them now.
Well, I was a bit discouraged. I packed up my stuff and then pulled out my binoculars and watched the waves in close detail for a while before heading home. I know what this point in my progress is. I have been here before and I recognize it. It doesn't make it any less discouraging though. To top it off, several odd things seem to come together to make it seem even harder.
When I got back home, walked Twill, and had a good lunch, I did some studying. I am ready to try a new level when I get back out to the beach to paint tomorrow. I might make a mess but I think it will be a good thing.
I am almost finished with the book on Frederick J. Waugh. The final chapter is called Waugh's Suggestions on Marine Painting. I thought I would share a couple tidbits before ending the post.


"No doubt", writes Waugh, "the sea is a difficult subject. To paint it convincingly means long, careful observation of its many phases and its anatomy, for the sea has anatomy."

Indeed it does both as a whole and as parts. I have noticed that even the waves have spines. That has been most helpful for me. I will get those pesky cross waves painted accurately yet!
My favorite quote by far, which I have on the welcome page of my website (others have used this one too) is the following:


"To paint the sea, you must love it, and to love it, you must know the sea."

There is a lot of truth in those words. You need the love and the knowledge to keep painting it when it gets hard, as it often does. I have been told that it is extremely hard to make a living painting seascapes and that so many people want to be seascape painters and give up. Well, I love the sea, to the core. I have considered the ocean my "hometown" for decades now. That means I won't stop painting it, even if it means that I won't be rich and famous!

Good luck today RL, a little study goes a long way.
Thanks for sharing your progress and studies.
I have no waves to study, so watching and reading about your journey is nice. Thanks

Hold that thought! AND get out on the sea Renee. You're close enough that you can. I too love the sea, probably not as you do, but there is a totally different energy being on it as opposed to being on shore watching it.

Thank you for the encouragement JanettMarie, I appreciate it.

Good thoughts Theresa. I grew up sailing on the ocean, swimming, body surfing, and surfing. My father was part seal and made sure we learned to respect and love the sea. I have spent years playing in the waves, and often getting creamed and pounded into the sand. I love to snorkle and know what waves look like from under the sea too! All of that definitely adds to my love and determination. So, yes, you are right. A different energy but important too. Thanks for the comment!