Wow! What a day. In case it wasn't noticed, I amended the previous post with an update. I corrected the painting that went wrong as much as possible and then posted it. This afternoon, I went to my favorite spot, Hug Point to paint. I timed it so I would arrive before low tide to get in as much painting as possible. Low tide was at 2:10 pm.
Hug Point has a rich history and the story of it, even a nutshell version, would take up this entire post and then some. I will just say there is a old road bed carved from the original Native American path that, for a long time, was the only way to get horse and buggy, and later cars, south. It is a dangerous place depending on the tides, even to this day.
I wanted to paint this roadway with the waves in the background. Unfortunately for me the low tide was at 1.5 ft. Not quite low enough to have more than a half an hour to paint. It can look so deceiving. The waves look far away but, if you are paying attention you will notice that about every 7-10 waves or so several pile up and spill forth, all the way to the back caves which was probably 100 yards or more away. I waited until one of these surges went through and ran a fair distance to grab the following photos. I was able to dash back to safety. I will show the photos and continue the story. 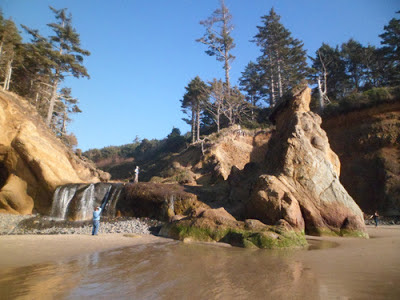 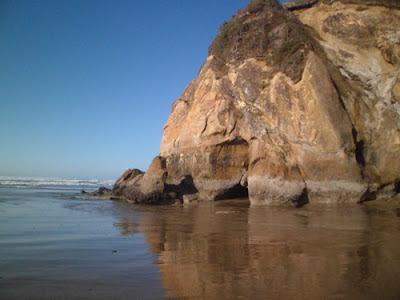 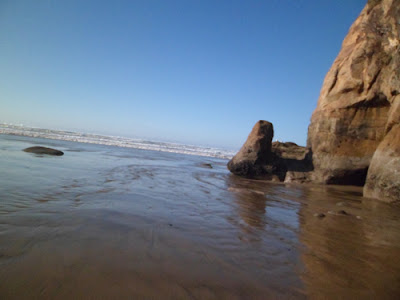 The first picture is what you see when you go around the first point. This point is the easiest to get around. There is another small point and then you get to the roadbed. The second picture is looking at it about half way there, the third picture I am standing next to the cliff. There is a couple of caves behind me about the same distance. The water was rushing into those caves. As you can see, the waves look like they are quite a ways out there. They lie. Where I am standing was underwater every time a surge came through.There is no where to run when the tide is that high. Since it was the low tide one can see why it is so dangerous when the tide comes in.
The third picture is part of what I wanted to paint. You can see the beginning of the road, which looks like a ramp. The road is covered with living sea anemones, seaweed, barnacles, and other tidal creatures. I have never crossed all the way because I get too squeamish stepping on all those squishy creatures, not to mention harming them. The road goes around the point and at one time you literally had to "hug" the point to cross, hence the name.
As I was standing there catching my breath a woman with a group of about 8 or 10 teenaged girls started to go by me. I stopped them and explained that they might want to wait another half an hour. They didn't read the tide chart right. That can be easy to do which is why I check it 3 or 4 times before and during my arrival. As soon as I explained it to them I noticed the waves getting ready to surge again and told them all to watch out. I started to run back and was soon surrounded by several shrieking teenagers which slowed me down to the point that I, and they, got wet to the knees (Hey! I had a heavy painting pack on which meant they were faster than I was).
I told several people today about the waves and most ignored me and came back soaking wet. One grandmother with her grandchildren got soaked as she went back to grab the small boy who was wet from head to toe when the waves subsided. Most troubling was the young couple with the dog on the leash and a 6 month old baby in the mother's arms that I was too far away to warn as I was packing up for the day. The tide was already coming in fast. Hopefully they made it back and I am sure they all got wet. (note: I waited a while and then told others to watch for them as I left. I know people think I am being a busy body but I hate seeing people so oblivious to their environment)
Here is where I ended up painting: 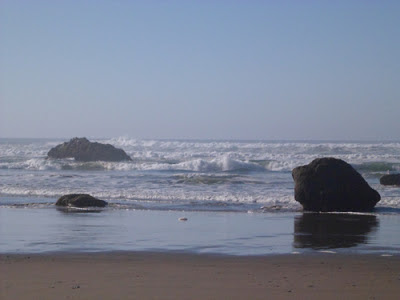 This is where you first go down to the beach. This is what it looked like when I left: 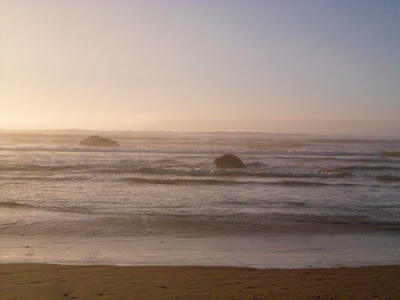 I was pretty far back but not far enough. Just as I was putting the final touches a huge surge came in and I had to lift my tripod and paintbox and run. Thankfully I always put the rest of my gear well up the beach so I don't have to worry about that too.
Finally, here is the painting. Wave Study #23 and Day 18:
I have discovered I like painting rocks too although I need more practice. I have always loved rocks.

Today was a fun and very satisfying day. I love what I do, even when it is hard, and I don't want to be in any other profession.
I made a video today too. I have three videos now to edit and put up on the blog. As I said before, it might be after this challenge is done but they should be fun.
The weather looks like it is changing a bit. We shall see what tomorrow holds.

Wow, get behind for a couple of days and look at all the painting and stuff I have to catch up on.
Wave Study 22, love it. And what a good Buddha quote!